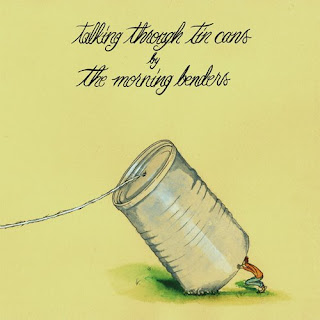 I would say The Morning Benders are many endearing things. Cute, quaint, suttle, modest, innocent at times, passionate at others. The latter, passionate, keeps this album from the 8.0 you would want it to be after listening to side A.
From the very beginning, The Morning Benders will have you rooting for them. Their music, driven by Chris Chu, is punchy, peppy, up-beat Indie Pop. The feeling you get from listening to their tunes, is what you would expect to feel when looking at their album cover. The little boy talking into the huge tin can. This is representative of them as a band. The little band packing a big, impressive bunch. This is an audacious, and straight-forward debut, in a decade with several strong debuts (see Fleet Foxes, Vampire Weekend).
.
.
"Damnit Anna" sets the tone for the album. Fast and upbeat, but with thoughtful lyrics. A fun note about these songs is that many of them merge into each other (Dark Side of the Moon, anyone?). The Morning Benders sound as much like The Beatles around "Rubber Soul" as The Shins on their debut and "Chutes Too Narrow". The first 5 songs on the album are gems; very straight-forward Indie-pop laced with organs and acoustic guitars with lyrics full of love, broken hearts, odd folk stories. These songs sound very familiar, nothing too progressive, a safe move on their part. Safe is another point I'd like to draw with this album. It's not necessarily a bad thing, but this album doesn't do anything that hasn't been done by The Shins and other indie darlings of the decade. Like I mentioned before, after Side A of the album, you're rooting for them, and ready to call this a great album. It's not that this album isn't great, it's just that the passionate, heart-broken lyrics of "Heavy Hearts", "Wasted Time" and "Chasing A Ghost" mess with the happy theme of the album that was going in Side A. I prefer that happy "I Was Wrong", "Patient Patient" and "Waiting for a War". But with "When We're Apart", the album's closer, all is forgiven. This acoustic ballad is wonderful. It shows the musicianship of Chris Chu and his habit for making happy, almost cute songs. These are the strongsuit of the album, and the Benders would do best to continue that on their sophomore effort. In my opinion, it's Side B that drags this album away from "great" territory, but a solid album nonetheless.
.
.
Highlights: "Waiting For a War", "When We're Apart"
Listen if you like: The Shins, The Beatles, Little Joy
Posted by Griffin Taylor at 11:20 PM